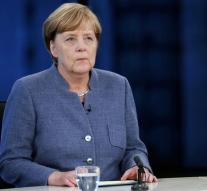 munich - The CSU, the Bavarian sister party of Angela Merkels CDU, suffered a considerable loss in the German parliamentary elections. According to the exit polls, the CSU only achieved 38.5 percent of the votes for the party, where a score of 49.3 percent was four years ago. This is the worst federal election result for the CSU since 1949.

'The election results of the federal elections in 2017 are a big disappointment for us,' said CSU leader Horst Seehofer. He was still well in the clinch with Merkel about her refugee policy earlier this year. Later, Seehofer reconciled with the Chancellor. However, the battle ax was not completely buried. Recently, Seehofer reiterated an upper limit for the number of refugees, something Merkel absolutely does not want.