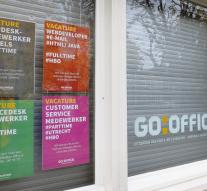 - Of the 2013 graduates and 73 percent of graduates found a job immediately. Five years earlier, that figure was 82 percent. This was reported by the Central Bureau of Statistics (CBS) Friday. The figures show According to the CBS that even for people who have completed a course of higher education in recent years has become more difficult to find a job.

Of the more than 33,000 students leaving a college education without qualifications, the chance to have immediately work greatest for those who already had indeed had an MBO diploma. Even for those who left university education without graduating (11 000 people) had the chance to instantly find a job depends on the training. Three-quarters (76 percent) of the dropouts who could fall back on a college degree was fast work, compared with just over half (56 percent) of those leaving with only a VWO diploma.