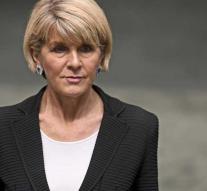 canberra - The Australian Minister of Foreign Affairs has resigned. Julie Bishop announced on Sunday that she would resign. For the time being she will continue as a parliamentarian.

Bishop stepped up in the aftermath of the departure of her political boss, Prime Minister Malcolm Turnbull. He has been pushed aside by party members. Turnbull thanked his former minister Sunday for her loyalty and friendship. ' She is and remains an inspiring role model for women in the whole world '', wrote the former prime minister on Twitter.

The politician represented her country after the collapse of flight MH17, in which dozens of Australians lost their lives. She negotiated, among other things, the repatriation of the mortal remains of victims. She also joined the UN Security Council to ensure that researchers could access the disaster site. That is seen as one of her great successes, reports Australian media.