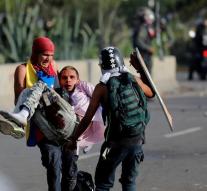 caracas - In the last two months, about 15,000 people have been injured during the protests against the Venezuelan government. That said opposition leader José Manuel Olivares at a press conference, according to the Spanish newspaper 20 minutes saturday.

According to law in the South American country, 63 deaths have fallen in the same period. Olivares accuses the Maduro government of using excessive violence against protesters demanding the resignation of the president. According to Oliviers, the group of groups throws tear gas grenades to the protesters. They therefore burn burns on their bodies.

Protests against the Leftist Government of President Nicolás Maduro began in April, because the supreme court of the country had put Parliament on a sidewalk. This step was quickly reversed, but the public distress was not tempered. The country is in a chaos, the economy has collapsed.