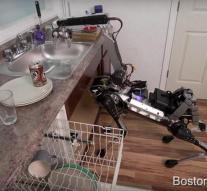 Thus, the mechanical quadruped can collect the dishes, reports The Guardian. Spot Mini can also climb stairs and maneuver in tight spaces. Moreover, the robot dog can bring its owner a drink.

Spot Mini was developed by Boston Dynamics, which was acquired in December 2013 by parent company Google. The quadruped is the first robot that Boston Dynamics developed for indoors. The robot dog less than 30 kg is also the smallest and quietest of the bunch.