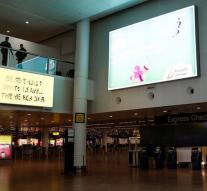 brussels - In Brussels since the attacks of 22 March 124 made bomb threats, averaging nearly one a day. It reports the newspaper La Dernière Heure, based on figures from five of the six police districts in the Belgian capital.

People according to the police because of the tense situation more likely to report suspicious persons or package.

In 2014 the number of reports was on average 5 per month. After the attack on the offices of Charlie Hebdo in Paris in January 2015 it rose to an average of 11 per month and after the attacks in the French capital last November, to 22 per month.


Wednesday still some panic arose when it was reported two bomb threats on flights that were en route to Brussels Airport in Zaventem. Also from other parts of the country lately are relatively many reports of suspicious packages and letters powder.