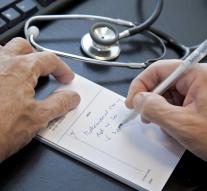 - The number of people not pay the premium for health insurance in five years by more than a fifth ( 22 percent ) increased to 298 000 . Young, men, people with low incomes, recipients of benefits, single parents and ethnic minorities are more likely than average defaulter , reported the Central Bureau of Statistics ( CBS) Friday .

Late last year, was one of the 45 adults on record as defaulter.

When young people under 35 years, first at 29 for at least six months not paid the premium for the over-65s, this one on the 250. It is also striking that women are much less likely to default than men: one of the 59 women as compared to 1 out of 37 men.

According to the statistics office defaulters have much lower incomes than people who have to pay the health insurance premium.

If the last group earns an average of 25 000 a year, with defaulters is around 16 000 euros. Among people with incomes less than 16 000 is one of the 18 defaulter. In people on welfare even it is one of the 7. The CBS also noted that younger immigrants nearly three times as likely to have arrears compared to native youth. Among Antilleans (1 in 7), the proportion of defaulters is highest, followed by Surinamese (1 in 12).