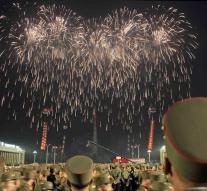 washington - The United States, Japan and South Korea want the UN Security Council to bring new sanctions against North Korea. That is why the regime in Pyongyang has to admit that its 'provocative and destabilizing' actions remain unaffected, the three countries put together a joint statement.

The leaders of the countries spoke on the G20 in Hamburg to exert 'maximum pressure' on North Korea. They called the missile test this week 'a big escalation' and agreed to launch a new resolution in the Security Council which imposes further penalties on Pyongyang.