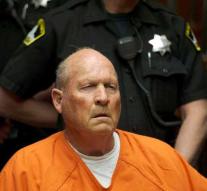 sacramento - The former policeman who is suspected of being the Golden State Killer appeared Friday before the judge. The 72-year-old Joseph James DeAngelo made it clear that he understands the charges.

DeAngelo was in a wheelchair and showed little emotion. He hardly spoke. The former agent is being prosecuted for eight murders that have been attributed to the Golden State Killer. That notorious serial killer would be responsible for twelve murders and 45 rapes in the 1970s and 1980s.

The police tracked down the suspect by comparing DNA from the crime scene with genetic profiles on websites that are used to trace family trees. He turned out to have worked as a police officer in California in the 1970s. He lost his job in 1979 after being accused of shoplifting.