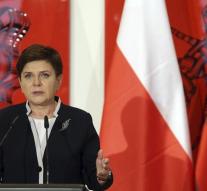 warsaw - The political crisis in Poland continues unabated. For more than three weeks, the angry opposition in parliament opposes the indignant representatives of the Conservative government. Since December 16 keeps the opposition occupied the parliament. The opening of Parliament after the Christmas break took only minutes.

The chairman adjourned the session almost immediately to Thursday. The Parties call or arguments to each other, but a solution is still not in here. That ruling party PiS's intention to keep the parliamentary press at many hearings, gave up the argument has not been resolved.

Chaos abounds and blame the opposition for democracy contempt resound daily in the parliament building.

Secondly, the government of Prime Minister Szydlo can count on the support of many Poles. He lowered the retirement age and increased the minimum wage. Outside Poland to resolve the President of the European Council Donald Tusk Warsaw reminded the crisis for once. Tusk is himself a Pole.