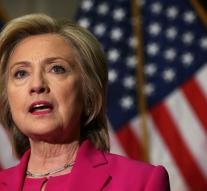 - Now Vice President Joe Biden is definitely not a candidate for the presidential elections of 2016, all eyes are focused on Hillary Clinton.

Clinton is ahead in the polls as the candidate of the Democrats. Yet the race is still somewhat exciting. Her main opponent, Sen. Bernie Sanders, namely it does well at left America.

The last time there was much speculation about whether Biden would submit an application. The Vice President made ​​Wednesday at a press conference that he renounced it. He said he had no time to put a campaign on its feet.

Biden, who earlier this year lost his son Beau, referring to the period of mourning, he and his family have since gone through. He let out extensively with his family members talked about a possible candidacy. Beau Biden, who died of cancer, his father before his death urged to stand as candidates.

Both of them has twice as a candidate in the past, in 1988 and in 2008. Both times he retired early from the race.

Biden was seen as a serious alternative to Clinton. He is especially popular among the white working middle class. Earlier still he described himself as " middle-class Joe.