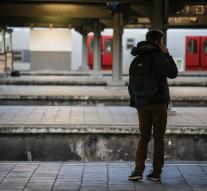 brussels - All entrances to the train stations in Brussels, Antwerp and Liege are open again. After the terrorist attacks of March 22 in Brussels side entrances were closed for travelers to simplify security and not too much to burden the police and the army.

The stations of Brussels South, Brussels-North and Brussels-Central, Antwerp Central and Liège-Guillemins since Wednesday as ever accessible, let rail company SNCB know, as a result,, a favorable opinion of the Crisis Centre '.

Earlier this week it was announced that passengers can disembark take the train to Brussels Airport weather station which is directly connected to the airport terminal in Zaventem. At metro stations in Brussels are not open all entry yet.