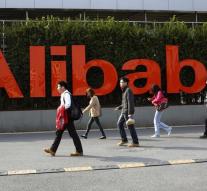 - The Chinese e-commerce giant Alibaba, this year again did not allow a US blacklist of sites that sell fake goods. Why is the American trade organization USTR that Alibaba should do more to curb the sale of pirated products on its online platforms.

For Alibaba, the absence blacklisted a victory, even if there are no penalties attached to the list. Chinese retail giant carried out in recent months strong pressure not to be named on the list. Mention could possibly translate into a decline of its share.

For years, Alibaba does a lot of things to clear his name and no longer generate the image that its websites are forgiven of fake goods. This year the company, however, was again suspected of offering counterfeits on its platforms. However, Alibaba says to do everything to prevent supply of fake goods on its sites. 'We continue to work with brands, governments and our vendors to maintain the integrity of our market places,' as a spokesperson of Alibaba know by mail to Reuters.

Alibaba's Taobao and Alibaba marketplace. com have both been on the blacklist. Alibaba was removed in 2011 from the list, and Taobao in 2012 after they had demonstrated in collaboration with vendors of legitimate goods to clean up the sites.

USTR however still receives reports of beneficiaries that tackling Alibaba does not go far enough, is not transparent and difficult to use. The trade organization said the sites in the coming years also good to keep an eye on to see if efforts to remove counterfeit goods and sellers of fake goods fining effective enough.