Home / World / Ali and Ryan do it again 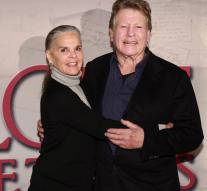 - She died 45 years ago in his arms and it was such a big success that they once again work together. Ali MacGraw and Ryan O'Neal gained world fame when they were in the romantic drama Love Story movie a couple in 1970 . They fell in love , but she fell ill and died.

The film was a worldwide hit and was a real tear jerker . The mainly female moviegoers often came crying out. The title music , sung by Andy Williams , was a worldwide hit. The yield ( $ 100 million), less than fifty times the cost ( 2 million).

Ali , now 76 years, and Ryan, 74 years, this time playing a friendly couple on stage. In the Wallis Theatre in Los Angeles to see them in the play Love Letters , reports The Guardian .

The play has been a quarter century old and played by many famous actors and actresses.

An older man and woman looking back on their friendship on the basis of the letters they wrote to each other for half a century. Many actors do not bother to do to learn their role : they can literally large parts of the letters read .