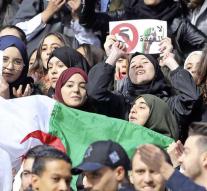 algiers - All candidates for the Algerian presidential election must register in person. That said the head of the election committee Sunday.

If this is applied, this would mean that incumbent President Abdelaziz Bouteflika (82) should present himself to the Constitutional Council on Sunday. He has rarely appeared in public since 2013 and according to Swiss media he was still in Switzerland this weekend for unspecified medical checks.

Tens of thousands of people protested in Algeria on Sunday against the candidacy of Bouteflika, who has been in power since 1999.

The presidential elections are on April 18.