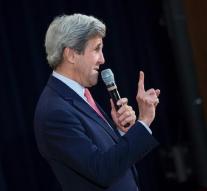 - For the US Secretary of State John Kerry, the end of violence in the Syrian city of Aleppo top priority. He said Saturday in a telephone conversation with UN envoy Staffan de Mistura and the Syrian opposition leader Riyad Farid Hijab of the High Negotiation (HNC).

Kerry stressed that we are working on,, special actions '' to reduce the resurgence of violence. He also wants the Russians put the Syrian government of President Bashar al-Assad under pressure to stop air strikes in Aleppo.

The city is already nine days plagued by deadly bombings. Friday, the US and Russia came a,, regime of silence '' corresponds to the capital Damascus and Latakia province. The truce does not apply to Aleppo.