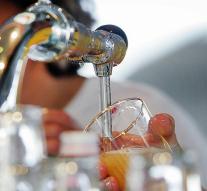 brussels - Who only has the driver's license in Belgium and want to crawl behind the wheel, may now have a drop of alcohol. Currently the limit is still at 0.5 per mille, which amounts to one or two beers. On that messages Tuesday several newspapers, such as De Standaard and Het Nieuwsblad.

Minister of Mobility Jacqueline Galant wants the limit for beginning drivers who have less than three years of their license, to reduce to 0.2 per mille. In practice, this means that you do not drink alcohol may have been drinking. However, the bar set at 0.0 is not technically feasible. Then you'd get by taking a hint of alcohol, for example a dessert in a fine.

The measure should improve the traffic safety in Belgium. Drivers between 18 and 25 years running eight times more likely to have a serious accident

In the Netherlands, for beginning drivers already have a BAC limit of 0.2.