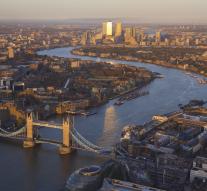 london - Two major streets in central London are closed Saturday afternoon during an incident which according to the police is still ongoing. Both Blackfrairs Road and Westminster Bridge Road, near Waterloo Station south of the Thames, are closed.

At the junction that connects the two ways is stopped an automobile. The three occupants were arrested, said a police spokesman told The Independent.

Agents warn people in shops nearby to stay to stay indoors and away from windows. Helicopters fly over the area.

It is unclear what the nature of the incident is exact.