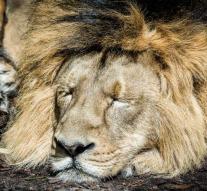 mumbai - At least 23 protected Persian lions have died in India in the last three weeks, including a rare disease. The Indian Council for Medical Research (ICMR) has called on the government to take immediate action to protect the species.

The Persian lion is threatened with extinction. Some six hundred of the animals live in the Gir Forest National Park in the state of Gujarat, where Prime Minister Narendra Modi also comes from. He called the lions the 'pride of Gujarat'.

The ICMR says that at least five of the big cats have recently died from the infectious CDV virus. The council advises the government to house the lions in 'two or three' different reserves. The Indian newspaper Hindustan Times reports that the situation of another 36 lions is closely monitored. Three of those animals would be seriously ill.