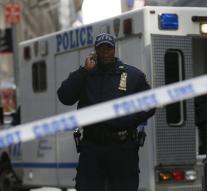 - A US soldier thought to have fun dressed up for Halloween, a lot has been incurred. The soldier tried suicide bomber dressed as a military base in Fort Bragg to come, but alarm bells went off.

Colleagues from the military sent a distress signal when they saw the man with the explosives costume. The army base was sealed off and the US bomb squad searched the premises to see if there are real explosives were present.

It is unclear whether the soldier is punished for his joke.