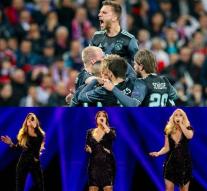 hilversum - Ajax won the fight for the viewers of the Eurovision Song Contest on Thursday night. The decisive match of the Amsterdamers against the French Olympique Lyon in the semi-finals of the Europa League attracted 2,661,000 people. The song festival with the performance of the Dutch entry OG3NE accounted for 2,451,000 viewers.

This is evident from the figures, the Stichting Onderzoeksonderzoek.

Both the OG3NE and Ajax women pushed through to the finals in their branch of sport.

The two broadcasts ended the first and second in the top 25 of Thursday evening.