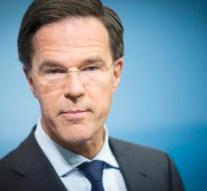 amsterdam - The Advisory Council on International Affairs (AIV) urges Prime Minister Mark Rutte and the Lower House to push the 'no vote' in the referendum None level aside and Ukraine to ratify the Treaty under certain conditions.

' If the Netherlands rejected the treaty, then this is the Russian President Putin perceived as weakness in Europe and it can encourage him to intensify destabilization of Ukraine, '' said Advisory Council Chairman Jaap de Hoop Scheffer in an interview with the Volkskrant.

It is according to De Hoop Scheffer important for Ukraine that we support them and that the country remains stable. ' It is also important for us to support the treaty, '' said the former Secretary General of NATO. ' We have to take care of stability in our European region. If we reject this treaty, we are in the EU is not a reliable treaty partner more. ''

De Hoop Scheffer says the AIV realizes that there is a politically tricky situation has arisen, but that the government and the Chamber are not obliged to follow the outcome of the referendum. ' Several parties oppose the treaty. They will each have to make their own decisions. ''

However, the president likes it better when multilateral treaties such as the Convention on Ukraine not be submitted to the future in a referendum. ' This kind of decision is complicated; it is extremely difficult to balance all interests. ''