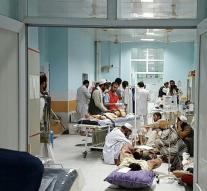 - The US air raid on a hospital in the Afghan city of Kunduz on October 3 was a tragic mistake. The cause was human error. That has research shown by the US military. The results were announced Wednesday.

The hospital was run by MSF, which organization thirteen people were killed. Ten patients also died. According to MSF seven people could not be identified.

The commander of US forces in Afghanistan, Gen. John Campbell, said Wednesday it had been to avoid the bombardment. " American units would never deliberately attacks a hospital ", he said during an explanation. Those directly involved are in the mistaken decision to attack suspended according to Campbell.