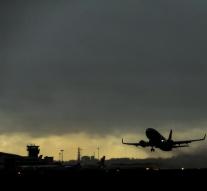 leeds - The Leeds Bradford Airport was evacuated for security reasons on Saturday night because of the finding of a suspicious package. Flights to Leeds are diverted to nearby airports, reports British media. Also a KLM flight from Amsterdam that had to land at 22:00 local time at East Midlands airport, told a spokesman.

Notice of the package arrived at the police at the airport around 20.00. Aircraft are kept to the ground and passengers are evacuated safely.