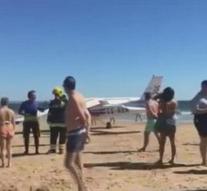 lisbon - A 50-year-old mother and an 8-year-old girl died on Wednesday when a plane landed on a beach near Lisbon. The two were sunbathing when they were surprised by the plane.

The accident took place on the Sao Jaoa beach on the Costa de Caparica, near the Setubal town. The plane is described as a light aircraft.

According to eyewitnesses, people entered the beach when the plane used the landing. The beach is about thirty kilometers south of Lisbon.