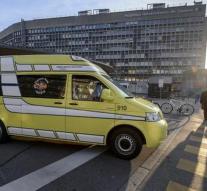 havana - A Cuban military plane crashed on the northwest of Cuba on Saturday. Accordingly, according to the Cuban Ministry of the Revolutionary Army, all eight occupants were killed.

The device flew Saturday morning (local time) against the Loma de la Pimienta mountain in the Artemisa region about 80 kilometers west of Havana. The cause is not known.

The device, an Antonov AN-26, had risen from an airport just outside of Havana.