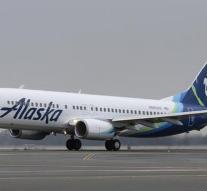 portland - Alaska Airlines has suspended flights from the US Portland to Anchorage because a male passenger tried to kiss a sleeping girl. The aircraft made a stopover in Seattle where the 23-year-old man on board was removed and arrested.

The man sitting next to the 16-year-old girl. When she was in a deep sleep, he tried to kiss her, ABC News reported Wednesday. When the pilot it was informed, they decided to land in Seattle to surrender the man to the authorities.

After a stop of about one hour, the device flew on, with the girl on board.