Home / World / Aircraft on the ground because of exams 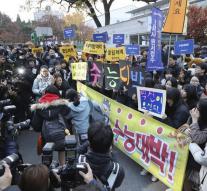 seoul - Pupils at the National Action Committee (LAKS) each year many complaints about noisy rattling lawn mowers or teachers during exams. They have a lot less problems in South Korea. There are even planes grounded for the examination candidates not to disturb.

The whole country seemed to come to a standstill on Thursday for the annual entrance examination for universities. Heavily loaded trucks at exam venues were not allowed on the road and the work was laid on many construction sites. Businesses were open later to be 600. 000 students minimize the burden on their way to and during their exams, the Guardian reported. Even the stock market opened an hour later than usual.

For 30 minutes in the afternoon, traffic was shut down. At that time there was a listening test site.

The entrance exams are vital in the ultra-competitive South Korea. A positive result in the exams means admission to one of the elite universities, which is the first step to a successful career and a good marriage. Students are often years in the preparation for the test.