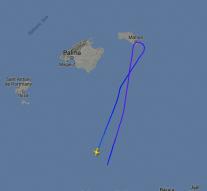 - A passenger plane which was en route from Algiers to Marseille broadcast a distress signal over the Mediterranean and soon after disappeared from the radar. It is a Boeing 737-600. It is still unclear what exactly happened.

On the radar can be seen that the aircraft above the Spanish island Minorca is reversed. Then drops the height and disappears from the radar. It involves flight AH1020 Air Algerie which is scheduled at five pm local time would land.