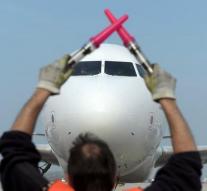 - In dense fog are an Airbus A320 of the French airline Air France Boeing 777 from the same company Wednesday with another collided at the Paris Roissy-Charles de Gaulle. The Airbus drove to the runway and the Boeing had just arrived from Dakar (Senegal). The aircraft collided with the taxi.

Airbus ran according to French media substantial damage to the tail. Both aircraft are towed. There are no injuries.