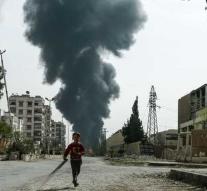 beirut - Heavy bombing of the Syrian city of Douma, where rebels still resist the army of President Assad and his allies, killed 27 people, including five children.

That is what the Syrian Observatory for Human Rights has announced. According to the British-based agency, the fighter planes carried out Friday 42 attacks on the last stronghold of the insurgents in East Ghouta.