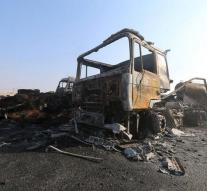 - When an alleged Russian air attack on a crowded market in the Syrian region of Idlib were at least forty people have been killed. This was reported by al- Jazeera Sunday based on local media in Syria. The air raid was carried out early in the morning at the site Ariha.

Photo: REUTERS                                           According to the activist transmitter Orient TV has paid a Russian fighter cluster bombs. The Idlib province located in the northwest of Syria and is in the hands of rebels, among them the terrorist group al- Nusra. Government forces of President Bashar al-Assad withdrew in May back from Ariha after an offensive by the rebels. Russia would especially bombard the region to help Assad to recapture the area.
NEW