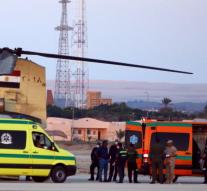 - Two of the largest European airlines, Air France-KLM and Lufthansa, have decided to avoid the airspace over the Sinai so long is not clear why there Saturday a Russian Airbus crashed. That spokesmen of both companies reported Saturday.

The Russian unit is on the return trip from the resort of Sharm el-Sheikh to St. Petersburg crashed on the peninsula. All 224 passengers have been killed. In parts of the mountainous Sinai jihadists groups have been very active. One of the groups, Wilayat Sinai (Province Sinai), claims to have shot down the unit.