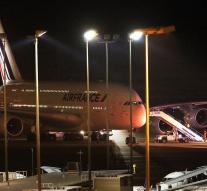 - Two planes of Air France that were en route from the US to Paris on Tuesday (local time) to make an emergency landing after a telephone bomb scares. On that American media reports.

The devices in quick succession from Los Angeles and Washington took off, had to move respectively to Salt Lake City and Halifax (Canada). The aircraft, an Airbus A380 and Boeing 777 and arrived safely to the ground.

According to Air France were received by the airline by telephone anonymous threats. It is not yet known whether there is already a person arrested in connection with the bomb threat.

The FAA, the Office of the US aviation authorities have confirmed that the aircraft due to " security " fled.