Home / World / Air above China dirtier than ever measured 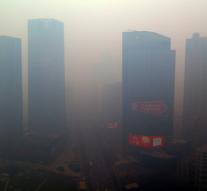 shenyang - A thick layer of toxic smog hangs over northeast China. The polluted air contains more than fifty times more matter than the maximum that the World Health Organization (WHO) has established. Air pollution is the worst since Beijing in 2013 began with the measurements.

Air pollution is a source of annoyance for many Chinese. Although the government regularly promises to do something about the dirty emissions the country is often covered by a layer of smog.

Visibility in Shenyang is less than 100 meters, reported the state television CCTV.

" The main reason for pollution is the burning of coal, which is necessary for the district heating ", said Dong Liansai of environmental organization Greenpeace. " China, the amount of coal the country consumes under control. "