Home / World / 'Aid workers are not ready for fight Mosul ' 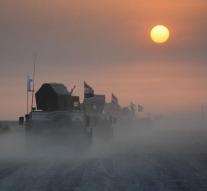 mosul - When the Iraqi army bet attack to oust IS Mosul, a stream of refugees will 'of biblical proportions' get going. Aid agencies are prepared though hardly there. That warning from Refugee Foundation. In camps around the IS main stronghold in Iraq is currently according to the organization accommodate about 100,000 refugees. In Mosul is home to about 1.2 million people.

Director Tineke Ceelen saw during a recent visit to northern Iraq no favorable omens. In a refugee camp in Kirkuk, they saw that every tent already was shared by three families. 'Forty people share one toilet, the rest of the amenities are comparable poor. And then from Mosul refugee flow has yet to get underway, 'said Ceelen.

What the refugees will be exactly, nobody knows in advance. Refugee Foundation has military sources informed that it soon can handle 200 000 people in the first few weeks. If the fighting continues, can deflate almost the entire city.