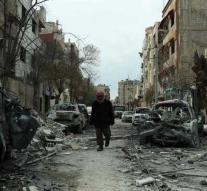 amman - The Jordanian army has started distributing aid supplies to thousands of Syrians who have camped close to the border.

The Syrians want Jordan, but that country has closed its borders after Syria launched a new offensive this month, killing tens of thousands of people.

On social media, images of a large crowd circulate against tanks and troops of the Jordanian army.

The United Nations has temporarily stopped supplying relief supplies in the south of Syria from neighboring Jordan this week. Due to the fierce battle in the area, it is currently too risky.