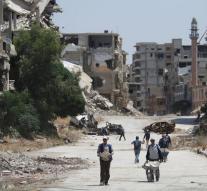 damascus - An aid convoy of the International Red Cross (ICRC) and the United Nations on Tuesday arrived in the besieged city Talbiseh in western Syria.

A total of 48 trucks brought food, medicines, blankets and kitchen utensils. It is in accordance with the ICRC's second largest line of vehicles carrying aid has so far achieved its destination in Syria.

The cargo is destined for approximately 40 000 inhabitants. There is also reason with engineers who are trying to restore the water supply in the city. Talbiseh, 13 kilometers north of Homs, as is since 2012 under heavy fire in the devastating civil war.