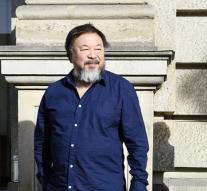 - The famous Chinese artist Ai Weiwei claims to be inundated with offers for Lego blocks, after the Danish manufacturer of the popular toys had refused him a large supply.

Ai Weiwei wants with the building blocks to make a work of art for an exhibition about him and Andy Warhol, to be held in the Australian city of Melbourne in December. LEGO, which is currently facing delivery problems by a sharp increase in demand, however, refused to provide him with the requested blocks, reports The Guardian.

Ai Weiwei called it " censorship and discrimination ", but received directly from the world offered alternatives. He said Monday in Berlin, where the political activist the next three years has been a guest lecturer at the academy.