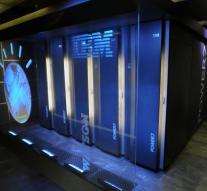 - The IBM Watson-supercomputer has helped Japanese physicians of at finding a rare form of leukemia in a patient. The doctors had first misdiagnosed.

Watson was able to compare the genetic makeup of healthy cells and cancer cells of the sixty women with one another and set at 1,500 points fixed changes. With this data in the 'mind' analyzed the artificial intelligence (AI) 20 million research and thus came to the conclusion that the woman suffers from a rare form of leukemia. Reported that the Japanese public broadcaster NHK.

According to the doctors Watson has already helped 41 patients with the diagnosis. The most recent is the second time that is found a rare form of cancer.