Home / World / Agreement puts an end to insurgency in Colombia 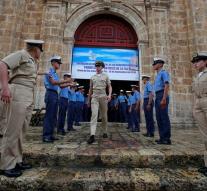 cartagena - Colombian President Juan Manuel Santos and the leader of the FARC, Rodrigo Londono, Monday signed a historic peace agreement. If the Colombian population agreed Sunday to approve by referendum, will bring an end to a war that has lasted and took the lives of 220,000 people half a century.

The agreement is the result of negotiations in the Cuban capital Havana, which lasted four years. When signing in the Colombian coastal city of Cartagena are also the Secretary General of the United Nations Ban Ki-moon and US Secretary of State John Kerry present. His colleague Bert Koenders represents the Netherlands. Our country has played a facilitating role in the negotiations.

The Dutch Tanja Nijmeijer, who was in FARC since 2002 and involved in the negotiations in Havana, is expected at the ceremony. It seems unlikely that they will meet with Koenders.