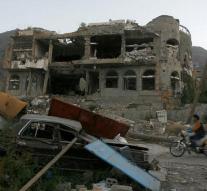 - By Saudi Arabia led alliance fighting in Yemen has announced a ceasefire against the Houthi rebels backed by Iran. It is intended that the warring parties Saturday at 12.00 (local time) lay down their arms for 48 hours. This was reported the Saudi Press Agency.

Both Saudi Arabia and the Houthi rebels had previously agreed on a ceasefire. The current Yemeni government headed by President Abd-Rabbu Mansour Hadi was against this because the Houthis would play into the hands. Saudi Arabia turns out there are still managed by pressing a chord.

The ceasefire will be extended if the Houthis respect the file and allow aid workers into the besieged area.

The conflict in Yemen broke out when Houthi rebels in March 2015 captured the capital Sanaa and President Abd-Rabbu Mansour Hadi chased. Saudi Arabia and its allies in the Gulf shots to help Hadi, to prevent Iran could increase its influence over the Shiite Houthi rebels. The Government of Hadi is still internationally recognized.