Home / World / 'Agreement in principle' on Turkish role in Mosul 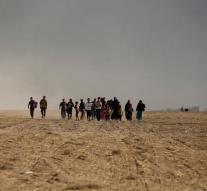 ankara - Ankara and Baghdad have reached an agreement in principle that could eventually lead to a Turkish role in the offensive towards Mosul. Said US Secretary Ashton Carter (Defence) after a meeting with Turkish President Recep Tayyip Erdogan.

' I think there is an agreement in principle. We now look at the practical aspects of it. That is what we are working on now, '' Carter said in Ankara.

Turkey has a military contingent in northern Iraq to train fighters. Which should include helping the recapture of Mosul on Islamic State. It's against the sore spot of the Iraqi government, which sees the presence of Turkish troops as an infringement on Iraqi sovereignty.