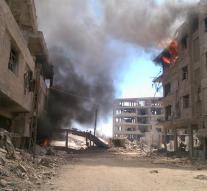 damascus - About 5,000 civilians and rebels will soon be evacuated from a suburb of the Syrian capital Damascus. A commander of the rebels who have owned since 2012, the district had Thursday daraya know that an agreement has been concluded with the military.

The neighborhood is under siege for a long time. Citizens came stuck and relief organizations like the Red Cross described the conditions there as previously hopeless. In June there was some improvement, then thanks to a cease-fire finally relief daraya were in.

According to the rebel commander begins the massive evacuation Friday.