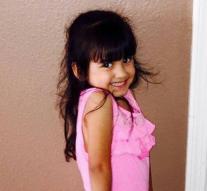 albuquerque - An American toddler has a case of road rage on a highway in the state of New Mexico must kill workers. A motorist shot at overtaking on the car where the four- year-old girl worthwhile endeavor with her ​​parents. The child, who was sitting in the back seat, was hit in the head and died shortly afterwards.

The perpetrator went off at high speed. Prior to the shooting, there was between the motorist and the father of the girl have been arguing for a traffic situation. What exactly happened is not clear.

The gunman remained at large and the police have enlisted the help of the public to find the man.

A relative has started an action to help with the cost of the funeral of the girl Lily Garcia.