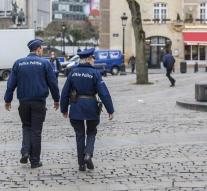 brussels - In Brussels Wednesday two police officers attacked with a knife. A policeman was stabbed in the neck, the other in the abdomen. The perpetrator was shot in the leg by a police team arrested, Belgian media report.

The agents are not put in danger and to a hospital, as well as the perpetrator. The stabbing took place just before noon on Lambermontlaan in the Brussels commune of Schaerbeek.

The motive behind the stabbing is unclear. The Public Prosecutor investigating the case.