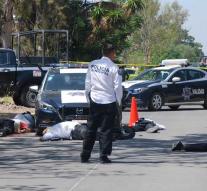 mexico city - Gunmen have certainly killed six traffic cops in Mexico. The six were under fire during a routine check in the city of Salamanca in the middle of the country. The authorities report that.

It is one of the deadliest attacks on security services in recent months. The motive for the shooting is unknown.

Salamanca is home to one of the six refineries of the state-owned oil company Pemex, which suffers from increasing theft of fuel and violence between rival criminal gangs.

Murder attacks are the order of the day in Mexico and reach an annual record level, according to official data.