Home / World / Agents G20 invited as a gratitude for a concert 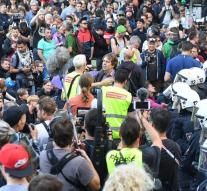 - A few days after the top conference of twenty economically leading countries (G20) in Hamburg, police officers who were used around the summit were invited to a concert.

On Thursday, pianist Sebastian Knauer plays in the new Elbphilharmonie concert hall in Hamburg for an audience of 2000 agents and partners or other involved staff. For agents coming from other parts of the country, hotels offer free rooms available, local media reported on Tuesday.

Extremists and riders changed parts of the port city from Thursday evening to Sunday in a battlefield. There the overloaded police tried to keep the violence out of the area where the summit was. In addition, about 475 of the nearly 20,000 agents were injured. More than four hundred arrests have been made.

The extent of the violence that was committed by mostly black-dressed perpetrators has shocked the whole country. The main political parties demand more attention for the violence that comes from the left-extremist angle.