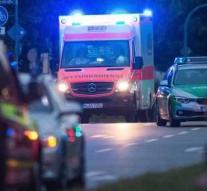 darmstadt - At a major music festival in the German state of Hesse several agents were injured when they were attacked by a large group of party people. According to a spokesperson for the police, about fifteen cops sustained injuries.

The agents were pelted with bottles after the so-called Schlossgrabenfest, a free festival in Darmstadt near Frankfurt. The police who were on the scene with a lot of people and a helicopter, have stopped several wheel turners. Some of them were masked. The reason for the disturbances is still unknown.