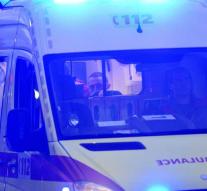 liege - Of the four police officers who were injured in the attack in Liège at the end of May, two of them were hit by bullets from the arms of special police units. Belgian media have learned this from police sources. The units opened fire when the attacker Benjamin Herman came out of the school where he had been entrenched.

The agents who were hit guarded the security zone and stood more than a hundred yards away. Two officers and a student were killed in the attack. The perpetrator was shot.

According to the trade union VSOA, the lack of training is the reason that police officers can be wounded by their own fire.